The Deposition of Jesus Christ 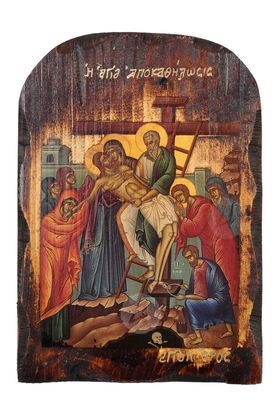 Weathered lithography (icon) of the Deposition of Jesus Christ in pine wood with carved decoration.

The Deposition was initiated by Joseph of Arimathea and Nicodemus, who, according to the evangelists, were Jewish rulers and secret disciples of Christ. Joseph asked Pilate to bury Jesus body. Pilate gave him permission and then, together with Joseph, they took Jesus body down from the Cross, wrapped it in a "clean linen cloth," and placed it in the empty monument that Joseph kept.

Other people who are not mentioned in the Gospels, but are often included in depictions of the Deposition are John the Evangelist, who is sometimes depicted supporting a half-hearted Virgin, such as in the painting "Deposition" by Roger van der Vaiden, but also Mary Magdalene.The Gospels report an unspecified number of women who attended the Crucifixion, including the Three Marys and Salome, while also mentioning that the Virgin Mary and Mary Magdalene were present at the Burial of Jesus. These, as well as some other women and some anonymous men who help in the Deposition, often appear in various works of art.