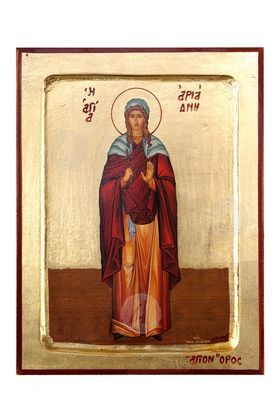 Martyr of the Christian Church, whose memory is honored on September 18 by the Orthodox Church and on September 17 by the Catholic Church. This day is celebrated by those who bear the name Ariadne.

According to the synaxarists, Ariadne was a slave of the lord Tertullus, one of the most powerful of the city of Promisea. She had converted to Christianity, but when her master found out, he pressured her to return to idolatry. She insisted on her faith and challenged Tertullus, when she refused to sacrifice to idols. Then they tortured her severely and stabbed her in the flesh.

She was temporarily released but Tertullus continued to pursue her. To protect herself from her pursuers, she approached a stone and prayed. God heard her prayer and the stone opened. In there, Ariadne, thanking God, surrendered her spirit. At the same time, her pursuers were killed by Angels, who speared them on horses with their spears.

Guided by the hand of Christ, thou didst excel in freedom of purpose, O Martyr Ariadne. Thou didst defeat the enemy and receive a crown woven with the grace of God. Entreat Him to have mercy on those who call thee blessed.