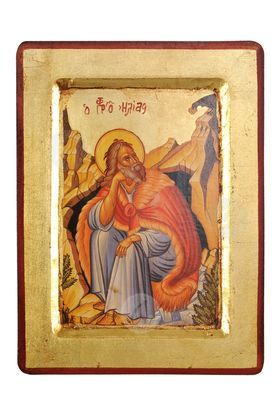 Lithography (icon) of Elias the Prophet with real gold leaf in MDF.

The Prophet Elias lived in the 9th century BC. during the reigns of Ahab and Ahaziah. He came from Thesve in the region of Gilead so he was named Thesbite. As soon as Elias was born, his father Sobak saw a divine apparition: Two men dressed in white named him Elias and gave him a flame to eat. The priests in Jerusalem told Sobak that his son would become a prophet, as he did.

Elijah was distinguished for his warm faith in God, as a result of which he received the miraculous gift. He prophesied the coming of Christ to earth and practiced his prophetic gift for 25 years. He was a staunch opponent of paganism and fought passionately for the betterment of the lives of his people. He ascended to heaven in a fiery chariot and was present at the Transfiguration of the Savior Christ. His memory is honored by the Orthodox Christian Church on July 20 of each year.

The incarnate Angel, the Cornerstone of the Prophets, the second Forerunner of the Coming of Christ, the glorious Elias (Elijah), who from above, sent down to Elisha the grace to dispel sickness and cleanse lepers, abounds therefore in healing for those who honor him.