Saint Alexios the Man of God 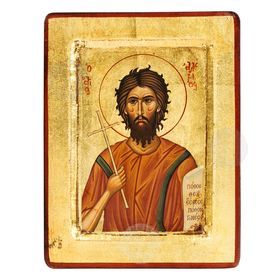 Lithography (icon) of Saint Alexios, the Man of God, with real gold leaf in MDF.

Saint Alexios was born in Rome and came from a rich and pious family. His father was named Euphemianus and his mother Aglais. His parents grew up him with love and offered him an excellent education. Alexios married a young woman of royal descent but on the same night of the wedding he left the marital home secretly. He arrived by boat in Laodicea of Syria and from there went to Edessa in Mesopotamia where he distributed his property to the poor. The Saint, for 17 whole years, lived outside the church of the Virgin Mary with fasting and prayer to God.

Alexios left Edessa and decided to go to Tarsus in Cilicia so as not to reveal his identity. But a great storm drove the ship to Rome and the Saint decided to return home. His parents, who had been looking for him for years, did not recognize him and offered him alms. He remained unknown for many years and lived in poverty, fasting and praising God. Shortly before he died he wrote his life on a piece of paper and surrendered his soul to the Lord. He was called "man of God" because when he died a voice came from heaven saying: "You have asked for the man of God." Euphemianus and Aglais transported their son's remains to the church of Saint Boniface and placed them in a shrine from which myrrh gushed.

His memory is celebrated by the Orthodox Christian Church on March 17 of each year.

Apolytikion of Saint Alexis the Man of God

Though thou didst bud forth from a renowned and notable root, and though thou didst blossom from a city famed for her great imperial dignity, yet didst thou scorn all things as corruptible and fleeting, striving to be joined to Christ thy Master for ever. Entreat Him, O Alexis most wise, fervently for our souls.