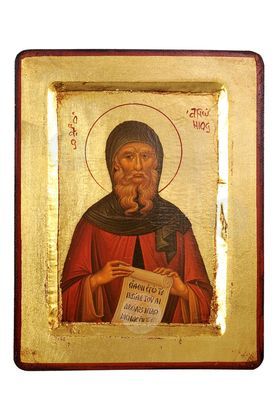 Lithography (icon) of Saint Anthony the Great with real gold leaf in MDF.

Saint Anthony was born in 251 AD. in the village of Coma in Upper Egypt by wealthy but virtuous Christian parents. At the age of twenty he became an orphan, distributed his fortune to the poor, renounced worldliness and lived an ascetic life for twenty-five years. His fame spread quickly and as a result the emperor Constantine the Great consulted him.

Anthony was very frugal and a role model for the ascetics. He slept peacefully in 356 AD. at the age of 105 years. According to his student, Athanasius the Great, his last wish was to keep his burial place secret. His remains were transferred to the church of Saint John the Baptist in Alexandria and then to Constantinople. Saint Anthony is the patron saint of Peristeri of Attica. The Orthodox Christian Church commemorates him on January 17 of each year.

Apolytikion of Saint Anthony the Great

O Father Anthony, you imitated the zealous Elijah. You followed the straight paths of the Baptist and became a desert dweller. By prayer you confirmed the universe. Wherefore, intercede with Christ our God to save our souls.