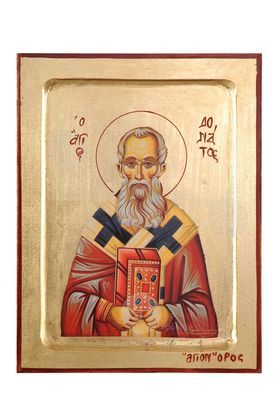 Saint Donatos lived in acritic Thesprotia in the period 310-387 AD and served as Bishop of Evria, at the time when Theodosius the Great was emperor of Byzantium. He developed great social action for the poor and the weak and became known for his miracles. The fame of his miracles spread and reached as far as Constantinople, so the emperor Theodosius called him to heal his daughter who was suffering from a demon.

Saint Donatos, after deep aging, died around 388 AD and was buried near the temple in Omphalios, Epirus, in a tomb that according to tradition had been built by him. In September 2000, part of his remains were transferred to the homonymous Holy Temple of Paramythia, after actions of the Ecumenical Patriarch Mr. Bartholomew and the Metropolitan of Paramythia Mr. Titus. The Church celebrates his memory on April 30 of each year.