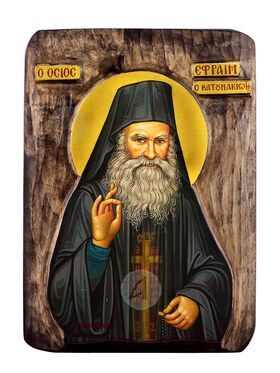 Saint Ephraim Katounakiotis, known as Evangelos Papanikitas, was born on December 6, 1912 AD. in Ampelochori of Boeotia and was the son of Ioannis Papanikitas and Victoria. From a very young age he showed a penchant for monasticism and socialized with monks and nuns. On September 14, 1933 AD. the Saint went to the Katounakia of Mount Athos and specifically to the sanctuary of Saint Ephraim of Syros. With the blessings of Elder Nikiforos, he became a monk named Ephraim in 1935 AD. and was later ordained a priest. At Mount Athos he met Elder Joseph the Hesychast who played an important role in the later course of his spiritual life.

Saint Ephraim of Katounakia was distinguished for his foresighted gift and helped many young people in their marriage and family life. In 1996 AD Ephraim suffered a stroke and two years later, on February 27, 1998, he surrendered his soul to God. On March 9, 2020 AD, the Holy Synod of the Ecumenical Patriarchate of Constantinople ranked him among the Saints. The Orthodox Christian Church commemorates him on February 27 of each year.