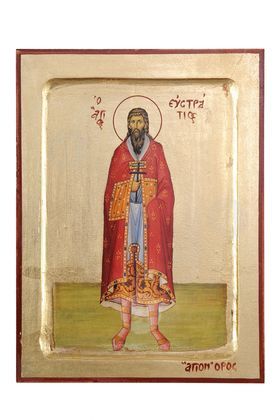 Saint Eustratius was a senior officer in the Roman army. During the reign of the Roman emperors Diocletian and Maximian, the persecution of Christians was relentless. The pious and virtuous Eustratius could not tolerate the torture of his fellow believers and decided to defend them. He appeared before the Prefect Lysias, who called him to renounce his Christian faith and to embrace paganism. The Saint refused and immediately Lysias ordered his torture. The thousandth Eugene, who carried out the tortures, shouted that he was a Christian, when he saw that Eustratius was not harmed, despite the brutality of the tortures.

Lysias then sent the Saint to the ruler of Sebastia, Agricola, who decided to throw Eustratius into the fire. On December 13, 296 AD. died, delivering his soul to God. Most of the Relics of Saint Eustratius are located in the Holy Temple of the Holy Trinity and the Holy Five Martyrs of Polystylos, Kavala. The Orthodox Church celebrates his memory on December 13 of each year.