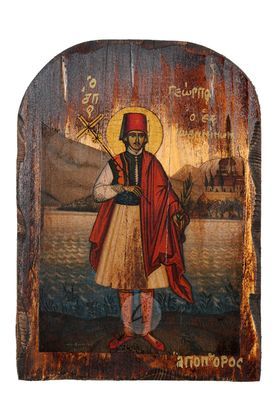 Saint George the New Martyr was born in the village of Tzourali in Grevena to poor but pious parents. At the age of 8 he was orphaned and in order to survive, he was forced to become a horse groom of an Ottoman army officer. At that time, he was under tremendous pressure to embrace the Islamic religion. Later, in 1836 AD., he engaged Helen, a virtuous Christian from Ioannina, as a result of which he was brought to trial, as a alleged traitor to the religion of Islam.

On January 12, 1838 he went to the market to find job. There, the hodja of his area, verbally attacked him with the accusation that he changed his religion. The saint was taken to trial, in which he declared that he would die a Christian and that he would not become a Turk. This resulted in him being horribly tortured and then hanged. Throughout his torment he remained unconvinced, confessing Christ. Many miracles took place after the death of George. The Skull and most of the Relics of the Saint are located in the homonymous Church of Ioannina. The Church celebrates his memory on January 17 of each year.