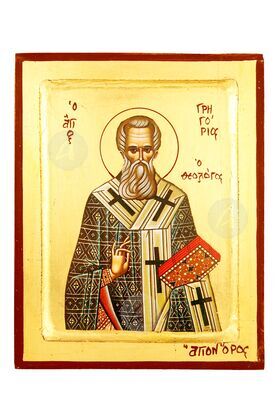 Lithography (icon) of Saint Gregory the Theologian with real gold leaf in MDF.

Saint Gregory the Theologian is one of the Three Hierarchs along with Basil the Great and John Chrysostom. He was born in 329 AD. in Arianzus of Cappadocia, a small village near Nazianzus. His father Gregory and his mother Nonna raised him according to the requirements of Christianity. When he finished his studies at the age of 30, he was ordained an elder by his father Gregory who was Bishop of Nazianzus. Later, at the age of 43, he was ordained Bishop of Sasima by his classmate and Archbishop of Caesarea, Basil the Great.

In 381 AD, Saint Gregory was elected Archbishop of Constantinople by the Second Ecumenical Council and later President of the Synod, positions from which he would resign. Gregory was a great figure of the Church with a rich literary work. He is known for his famous five theological speeches against the followers of Arius and Macedonius. He slept peacefully in 390 AD. at the age of 61 years. The Orthodox Christian Church commemorates him on January 25 of each year.

Apolytikion of Saint Gregory the Theologian

The pastoral flute of your theology conquered the trumpets of orators. For it called upon the depths of the Spirit and you were enriched with the beauty of words. Intercede to Christ our God, O Father Gregory, that our souls may be saved.