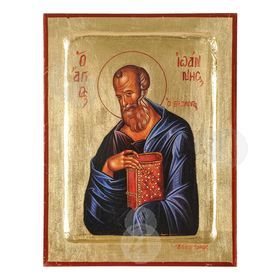 Lithography (icon) of Saint John the Apostle, Evangelist and Theologian with real gold leaf in MDF.

Saint John the Theologian was one of the twelve Apostles and the beloved disciple of Jesus Christ. He was born in Galilee to a poor family and before taking up the apostolic ministry he was a fisherman. He was the son of Zebedee and Salome and the brother of the Apostle James. He followed Jesus Christ, together with the Apostle Peter, to the Cross of Martyrdom and then received the Virgin Mary under his protection. When Jerusalem was destroyed by the Romans in 70 AD, the saint went to Ephesus and later, in the midst of torture, was exiled to Patmos, where he wrote the book of Revelation. He died in peace in Ephesus around the year 100 AD.

Saint John is the Evangelist of love and the author of the 4th in a row Gospel in the New Testament, the most theological of all, for this reason he was named Theologian by the Church. In addition to the Gospel and Revelation, he is the author of three Catholic Epistles. Together with the Apostle Peter, he was one of the first to preach the Word of the Lord to the whole world, after the apparition of the Holy Spirit. The memory of the Apostle John is celebrated on September 26 of each year.

Apolytikion of Saint John the Theologian

Beloved Apostle of Christ our God, hasten to deliver a people without defense. He who permitted you to recline upon His bosom, accepts you on bended knee before Him. Beseech Him, O Theologian, to dispel the persistent cloud of nations, asking for us peace and great mercy.