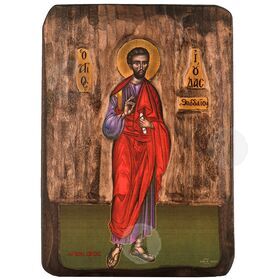 Saint Judas Thaddeus was originally from Edessa and was distinguished for his great education, especially in the divine Scriptures. When he arrived in Jerusalem to worship, he was impressed by the preaching of John the Baptist and was baptized by him. As a disciple of Jesus Christ he followed him until His Crucifixion.

After the Ascension of the Lord, he returned to his hometown and devoted himself to his apostolic work. He founded many churches in Syria and baptized many Christians. He died peacefully in Beirut, where he went to preach the Gospel of the Lord. The Orthodox Christian Church commemorates him on August 21 of each year.

O Holy Apostle Thaddeus, intercede to our merciful God, that He may grant our souls forgiveness of sins.