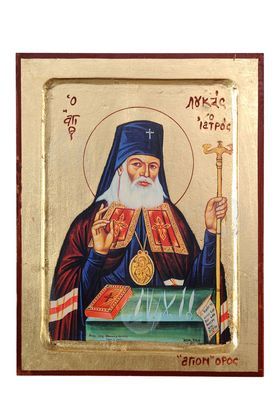 Lithography (icon) of Saint Luke the Surgeon of Simferopol with real gold leaf in MDF.

Saint Luke came from Ukraine and his secular name was Valentin. He studied medical science at Kiev University and married Anna Vasilyevna, with whom he had four children. When his wife died, Valentin was ordained a priest named Luke and later a bishop. He had the miraculous grace of God to heal the sick from whom he did not take money. He later became a professor at the University of Tashkent. Because of his courageous faith in Christ, he experienced persecution and endured martyrdom.

At the age of 70, Luke became Archbishop of Simferopol and Crimea. As archbishop he was distinguished for his struggle against poverty, which had reached enormous proportions at that time. On Sunday, June 11, 1961, at the age of 84, the Hierarch passed away. In November 1995 he was canonized by the Ukrainian Orthodox Church. His remains were recovered with great pomp on March 17, 1996. During the ceremony, many sick people were miraculously healed. The memory of Saint Luke the Surgeon is commemorated on June 11 of each year.

Apolytikion of Luke of Simferopol

O herald of the way of salvation, confessor and archpastor of the Crimean flock, faithful keeper of the traditions of the fathers, unshakeable pillar and teacher of Orthodoxy, pray unceasingly to Christ our Saviour to grant salvation and strong faith to Orthodox Christians, O holy hierarch Luke, physician wise in God.