Saint Mark the Apostle and Evangelist 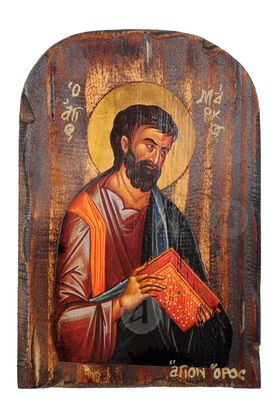 Saint Mark came from a wealthy family of Jerusalem and was raised by his mother Mary according to the Christian faith. According to the tradition, it is possible that the Last Supper was performed in his house. Mark accompanied the Apostle Paul and his uncle Barnabas on many of their missionary journeys. He was the first bishop of Alexandria where he martyred around 68 AD. The relic of the Saint is kept in the Basilica of Saint Mark.

Mark is considered the undisputed author of the Gospel of Mark which describes with simplicity and clarity the teaching and miracles of Jesus Christ. His memory is honored by the Orthodox Church on April 25 or the Tuesday of Diakainisimos. He is also considered a Saint by the Catholic, Lutheran, Anglican and some other Protestant churches.

Apolytikion of Apostle and Evangelist Mark

O Holy Apostle and Evangelist Mark, intercede to our merciful God, that He may grant our souls forgiveness of sins.