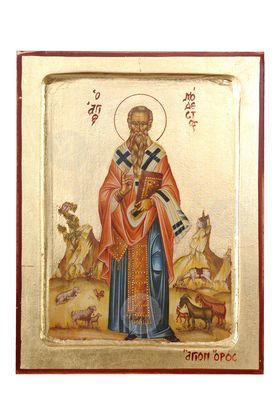 Saint Modestus was born at the beginning of the 4th century AD. in Sebastia, Asia Minor. During Diocletian's persecution, his Christian parents were imprisoned and died. The upbringing of the Saint was undertaken by a pagan. When Modestus grew up, he learned that his parents had given their lives for the Christian faith and he decided to become a Christian, secretly from his pagan father. Modestus was later taken over by a pious Christian from Athens who raised him according to the requirements of the Christian faith.

When the Saint was in Jerusalem to worship the Holy Sepulcher, the gates of the Tomb were miraculously opened. This was the reason why the people elected him Archbishop of Jerusalem. Modestus was distinguished for his philanthropic work and, with God's help, healed both humans and animals. The Saint renovated the Holy Shrines that had been destroyed by the Persians. According to one tradition, he died peacefully. According to another tradition, he was horribly tortured by the Jews and he was beheaded. Saint Modestus is considered the protector of animals and the Church honors his memory on December 16 of each year.