Saint Myron the Wonderworker of Crete 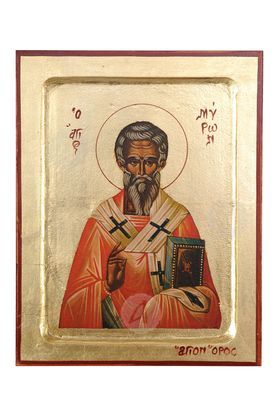 Lithography (icon) of Saint Myron of Crete with real gold leaf in MDF.

Saint Myron was born in the town of Rauko in Crete which was later renamed Saint Myron in his honor. He was distinguished for his charity and love for his fellow human beings. He was a model family man and protector of the poor and the oppressed. He was a farmer by profession. When he found some thieves in his field, he did not chase them but instead helped them carry his harvest, asking God to forgive them.

After the death of his wife, the Saint devoted himself completely to God and to the preaching of His Word. The inhabitants of Crete nurtured great love and respect for his person, as a result of which he ascended the episcopal throne of the island. He died at the age of about 100 years. Saint Myron is especially known for his miracles. His tomb, which emits fragrance, is visited by thousands of pilgrims every year. Fragment of the Holy Relic of the Saint is located in the Monastery of the Great Cave of Kalavrita. The Orthodox Christian Church commemorates him on August 8 of each year.

In truth you were revealed to your flock as a rule of faith, / an image of humility and a teacher of abstinence; / your humility exalted you; / your poverty enriched you. / Hierarch Father Myron, / entreat Christ our God / that our souls may be saved.