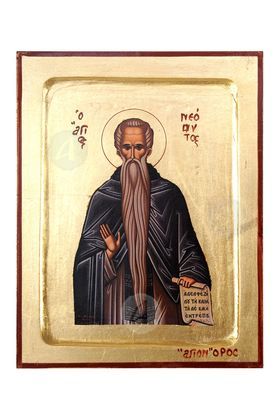 Lithography (icon) of Saint Neophytos of Cyprus with real gold leaf in MDF.

Saint Neophytos the Recluse was born in the village of Kato Drys in Lefkara of Cyprus in 1134 AD. His parents were poor and could not educate him. But he was raised according to the requirements of Christianity. At a young age he went to the monastery of Saint John Chrysostom to practice. He became a monk and was involved in the cultivation of the vineyards of the monastery. At the same time he learned letters and was distinguished for his warm faith. As a result, the Abbot appointed him chaplain.

Later he went to the Holy Land but soon returned to the monastery. He then retired to the area of Melissovouno and founded the Enclosure, a cave in which he practiced asceticism for 60 years. At the age of 36 he was ordained a priest and founded a monastery. The Saint slept peacefully and in old age on April 12, 1219 AD. He was a great writer and was distinguished for his hard ascetic life. The Skull and the other Relics of the Saint are kept in the homonymous Monastery of Cyprus. His memory is commemorated on April 12 of each year.