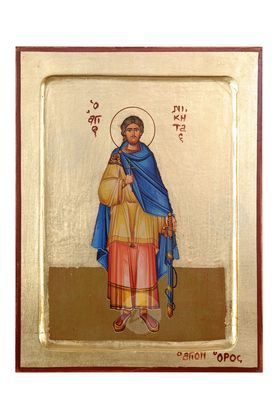 Lithography (icon) of Saint Nikitas the Goth with real gold leaf in MDF.

Saint Nikitas was born in Gothia and was a student of the bishop of the Goths Theophilos who participated in the First Ecumenical Council in Nicaea in 325 AD. When the Gothic ruler Athanaric began to persecute the Christians, the Saint accused him and denounced him as inhuman and pagan. Nikitas was arrested and tortured mercilessly. The savage tortures did not bend the faith of the Saint but instead he thanked God for this ordeal.

Saint Nikitas martyred in 372 AD, after being thrown into a furnace. His friend Marianos took his body and transported it to Mopsuestia in Cilicia. There he built a church and placed the miraculous relics of the Saint. The Orthodox Christian Church commemorates him on September 15 of each year.

Apolytikion of Nikitas the Great Martyr