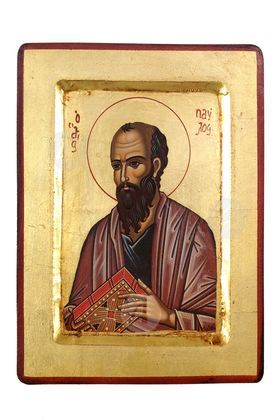 Lithography (icon) of Saint Paul the Apostle with real gold leaf in MDF.

Saint Paul the Apostle was born in Tarsus of Cilicia and was originally called Saul. He knew vey well the Greek language and studied Jewish theology in Jerusalem. In the beginning, he was a great persecutor of Christians and was present at the stoning of Saint Stephen. His conversion to Christianity was due to a vision he saw as he traveled to Damascus. From that moment he became a preacher of the Word of God and that fact provoked the hatred of the Jews.

Together with the Apostle Barnabas he went to Antioch of Syria where he preached the Gospel. From there he began his four major apostolic tours and was named Apostle of the Nations. He was martyred by beheading in Rome during the reign of Nero. He wrote 14 letters and is the founder of the Church of Greece. Fragment of the Holy Relic of Saint Paul is located in the Monastery Koutloumousiou on Mount Athos. The Orthodox Christian Church celebrates his memory on June 29 of each year.

Apolytikion of Saints Peter and Paul the Apostles

First in prominence among the Apostles, and teachers to the Universe, intercede to the Master of all for peace in the world and for our souls great mercy.