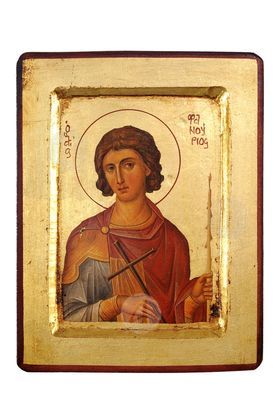 Saint Phanourios the Great Martyr was unknown to the Christian world until his icon was found on the island of Rhodes between 1355 and 1369 AD. We do not know anything about his life and where he died a martyr's death. The original icon of the Saint bore an inscription with his name and depicted a young soldier holding a cross and a lighted candle. Twelve representations of his martyrdom were painted around the Saint. After finding the icon, the metropolitan of Rhodes Neilos, built a temple to honor Phanourios.

The Orthodox Christian Church celebrates his memory on August 27 of each year. Saint Phanourios is the patron saint of Rhodes.

A heavenly song of praise is brightly sung on the earth; * the hosts of the Angels keep an earthly festival now in splendor and radiant joy; * from on high, they praise with hymns the suff'rings and struggles; * and below, the Church doth laud the heavenly glory * thou foundest by thy contests and pains, O glorious Phanurius.