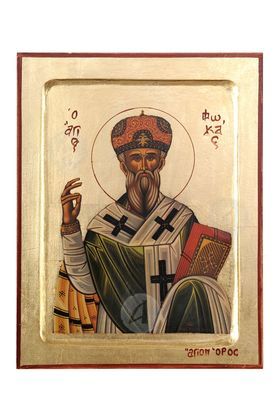 Saint Phocas the Hieromartyr was from Sinope of Pontus and lived in the early 2nd century AD, during the years of Emperor Trajan. Phocas's parents, Pamphylos and Maria, were very pious and passed on their faith to their son. From a very young age, he studied the Holy Scriptures and was distinguished for his sincere love for God. The Saint, at the urging of the pious Christians, became a priest and later became Bishop of Sinope. Simultaneously with his missionary activity, he performed many miracles, a fact that annoyed the pagans of the area and resulted in his arrest.

In front of the prefect African he confessed his faith and he, cursing, tried to hit him. The prefect then fell dead from a terrible earthquake, but the Saint resurrected him. Then Phocas was led to the emperor and tortured mercilessly, until he surrendered his spirit to the Lord. The Orthodox Church celebrates and honors his sacred memory on September 22 of each year.

As a sharer of the ways and a successor to the throne of the Apostles, O inspired of God, thou foundest discipline to be a means of ascent to divine vision. Wherefore, having rightly divided the word of truth, thou didst also contest for the Faith even unto blood, O Hieromartyr Phocas. Intercede with Christ our God that our souls be saved.