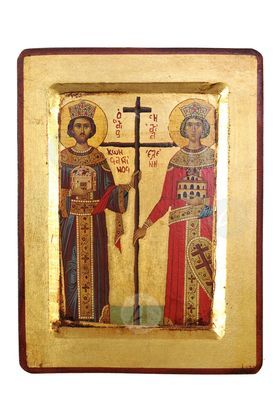 Saint Constantine was born in 274 AD. and was a military man by profession. He was distinguished for his bravery and rose very quickly to senior positions. With God's help he defeated his enemies and moved the capital of the Roman state to Constantinople. He sent his mother Helen to the Holy Land to find the Holy Cross. He was the first Roman emperor to embrace Christianity. Shortly before his death he was baptized a Christian. He died in peace in 327 AD at the age of 63.

Saint Helen, mother of Saint Constantine, was born in Drepano of Asia Minor in 247 AD. She found the Holy Cross and rebuilt many Christian temples. She was also distinguished for her great philanthropic work. After completing her mission in Jerusalem, she settled in Nicomedia where she died at the age of 80. The Saints are the patrons of Kastelorizo and the Orthodox Christian Church honors their memory on May 21 of each year.

Apolytikion of Saints Constantine and Helen

He beheld the image of Your Cross in the Heavens and, as Paul, he too did not receive the call from men. Your Apostle among Kings placed the care of the Royal City in Your hands. Through the intercessions of the Theotokos, O only Loving Lord, keep it ever in peace.