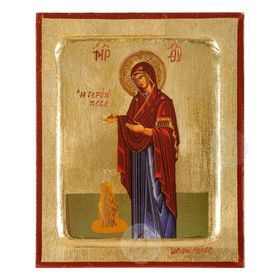 Virgin Mary Gerontissa is the icon of the Holy Monastery of Pantokratoros of Mount Athos and is located in the left column of the the temple of monastery. In this icon, the Virgin Mary stood up in a prayer position with great sweetness and beauty in her features. This icon is a donation of the Emperor Alexios Komnenos I and is a copy of a mosaic icon of the Virgin Mary Gorgoepikoos of the Holy Monastery of Pantokratoros in Constantinople.

The icon is considered miraculous. In its current form, the icon of Panagia Gerontissa is covered with a silver "shirt" depicting the lower left and a jar, in memory of a great miracle that took place in the 17th century: It was a difficult year for the Holy Monasyery of Pantocrator with many shortages in goods but mainly in oil. Many monks, unable to endure the hunger, left the monastery. The abbot, seeing the big problem that had been created, prayed to the Virgin Mary, asking for her help. After the warm prayers of the abbot, one morning they saw flowing oil from the door of the warehouse where empty jars were kept. They then opened the door and saw from a jar overflowing the oil with which they filled all the jars and managed to face the hunger. This jar is preserved as a heirloom to this day.

Synaxis of the Most Holy Virgin Mary Gerontissa is celebrated by the Orthodox Christian Church on December 2 of each year.