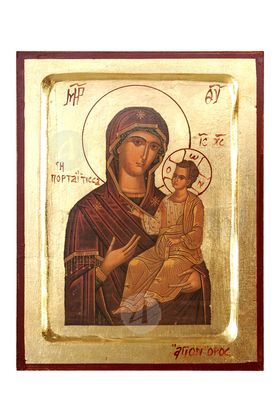 According to Christian tradition, the icon of the Virgin of Portaitissa belonged to a woman who lived in Nicaea, Asia Minor. During the iconoclasm and specifically in 829 AD, the woman threw her into the sea so as not to fall into the hands of the iconoclasts. For 170 years the fate of the image was unknown. In 1004 AD the monks of the Holy Monastery of Iviron saw a light in the sea and went to it by boat. There they saw an image, which, however, moved away as they approached it and the monks returned to the Monastery. An ascetic named Gabriel then heard the voice of the Virgin Mary telling him: “Go to your Monastery and tell the abbot that I came to give them my image. Then, walk to the sea, so that everyone knows the love and care I have in your Monastery. "As it happened.

The icon of Panagia Portaitissa was transferred to the katholikon of the Holy Monastery of Iviron, but paradoxically it was lost and appeared on the door of the monastery. Then Gabriel heard again the voice of the Virgin Mary saying to him: "Tell the abbot to stop teasing me, because I did not come to the Monastery to take care of you, but I came to be your guardian and guardian in her and in her future life. And those who will live with reverence and fear of God and do not neglect the acquisition of virtues, and end their temporary life in this place, let them have courage and not be afraid of hell because I asked this grace from God and my Son and I got it. As a confirmation of my words, I give you this point: As long as you see my image in your Monastery, I will not miss the grace and mercy of my Son and God from this Mountain ". The Abbot then ordered the construction of a chapel outside the door of the Monastery of Iviron and there the holy and miraculous icon was placed.

The Gathering of Panagia Portaitissa on Mount Athos is celebrated 2 days after Easter.