The Dormition of Virgin Mary 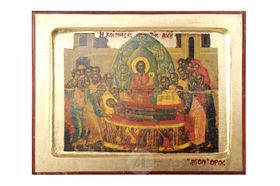 Lithography (icon) of the Dormition of the Virgin Mary (Theotokos) with real gold leaf in MDF.

The Dormition of the Blessed Virgin Mary took place in the house of the Evangelist John. According to church tradition, the Virgin Mary was informed of her death by an angel of the Lord three days before it happened and began to pray on the Mount of Olives. When Mary fell asleep, not all the Apostles were present in Jerusalem because they were preaching the word of Christ. A divine cloud grabbed them and brought them close to the Virgin Mary. The Apostles transported the Virgin Mary to the garden of Gethsemane and buried her.

The only absentee was the Apostle Thomas, who asked for the tomb to be opened to worship the Body of the Virgin. Indeed, after three days they opened the tomb and the Apostles were surprised to find that the Virgin Mary had been resurrected. A majestic church was built on her tomb, which is attributed to Saint Helen. After its destruction, the Byzantine emperor Markianos and his second wife Poulcheria built a new temple, which is preserved to this day.

Apolytikion of Dormition of the Theotokos Virgin Mary

In birth, you preserved your virginity; in death, you did not abandon the world, O Theotokos. As mother of life, you departed to the source of life, delivering our souls from death by your intercessions.