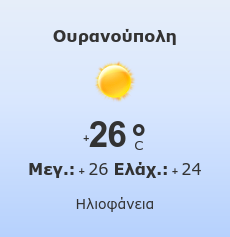 The Monastery of Simonos Petras celebrates on the 25th of December the birth of Christ. It was founded by the hermit monk Simon in the mid 14th century, when according to tradition, the monk saw a vision which suggested to him the exact position of the Monastery. The Monastery of Simonos Petras is located on the west coast, within two hours distance from Daphne and it rises on the brink of a rock at an altitude of 230 meters from the sea. The Monastery was initially called 'New Bethlehem', from the star that led Saint Simona, and this name was maintained until the 19th century. Then the Monastery had already been burnt three times but it was rebuilt with the help of abbot Neofytos Molakidis. In 1364 the Serbian ruler Ioannis Ougglesis endorsed the establishment with a golden seal and contributed economically to the Monastery and he also added new buildings and a great portion of land. Simonos is the 13th in hierarchy among the monasteries of Mount Athos. Details of the history from previous centuries are not known and this is because the files were destroyed in large fires that swept through the Monastery. The first fire occurred in 1580 and this destruction was followed by the fires of 1626 and 1891. After 1581 the fathers left the Monastery and settled in Monastery Xenophontos, paying its debts to the Fund of the Monastery. In the coming years the monastery was gradually rebuilt despite the economic deprivation of the monks and the economic assistance offered by the Romanian ruler Mihael Viteasul the Brave. In the 17th century Simonos was peculiar but in 1801 it was converted to a commune. Owner of the Monastery is also considered Agia Magdalene because with her left hand, which has been saved until today at the Monastery, she gathered large amounts that helped rebuilding.

The Katholikon honors the birth of Christ. It was destroyed in a fire in 1891. At the domes of the prothesis and the pulpit frescoes were preserved, which were probably painted in 1633 and renovated in 1858. The remaining temple is today without murals. The monastery owns 8 chapels inside, 4 outside, 4 Seats and 7 cells in Κaryes. The Prothesis was rebuilt after the destruction of 1891, without murals.

The Monastery has a historical library with remarkable books, a sacristy, and collections of preliminary drawings and caned works of its art gallery. 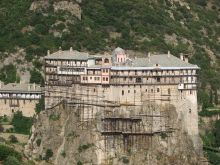 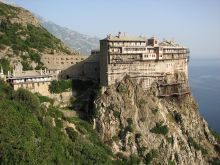 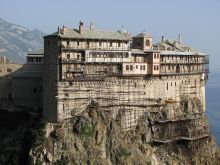 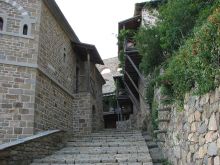 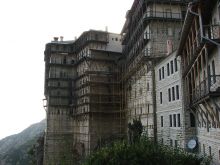 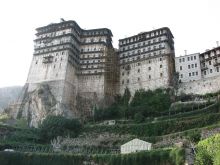