The Monastery of Vatopedi celebrates on the 25th of March the Annunciation of the Virgin Mary. Also the Monastery honors on the 21st of January the Virgin Mary the Vimatarissa. According to tradition the Monastery was built by Constantine the Great, it was destroyed and rebuilt later by Theodosius the Great in order to commemorate the Virgin Mary who saved his son, leading him close to a bush ("vato"), which is why the monastery is called <<Vatopediou>> (child in bush). In 892 it was destroyed by the Arabs and it was rebuilt by the monks Antonios, Nikolaos and Athanassios from Edirne. The Monastery of Vatopedi is located on the bay on the east coast of the peninsula, 50 meters above sea level and it is 3 hours away from Karies. It is the 2nd in hierarchy among the monasteries of Mount Athos. Buildings were built at all times until the 19th century. The first buildings were built with the assistance of the Emperor Manuel I Komnenos (1143-1180) while at the end of the century with the help of the monks Savvas and Simeon, founders of the Monastery of Helandriou, more buildings and fortifications were constructed. One of the subsequent benefactors of the Monastery was Lazaros I. Other benefactors were the ruler of Moldova Stephanos the Great and dukes of the Danubian countries.

The Katholikon of the monastery is dedicated to the Annunciation and it was built in 1312 and renovated during the 16th century. The belfry of the Katholikon is independent from the cathedral, it is 22 meters high, and it was built in 1427. Next to the Katholikon there is theStoup of Holy Water which is dated in 1842. Themurals inside the church and the prosthesis were created by painters of the Macedonian School and date back to the 14th-century. They were made with a donation of Emperor Andronikos II. In 1739 and 1819 these murals were painted over. Opposite the Katholikon is the Prosthesis of the 12th century with three arches and murals of the year 1786. Under the roof of the tower of the Katholikon, on the outer side, there is clock and next to an exotic male figure the 'Arapis', which strikes the bell with a hammer stating the hours.

In the library of the monastery there are 1,700 manuscripts (600 codes on parchment, 25 scrolls and 10,000 printed documents). Among the manuscripts, the most distinguished one is the Geography of the renowned Greek astronomer and geographer Claudius Ptolemeos (11th century) composed of 66 pages of text and from 42 colored maps. Also the Monastery owns some of the oldest and most valuable maps that exist.

The school was founded at Vatopedi in 1743 at the initiative of Patriarch Cyril and after actions of the monk Meletios, in an extent of 2.840 m². The academy opened in 1753 with Meletios as the life long commissioner of the school. The first teacher was Eugenios Voulgaris in 1753. At the beginning of the 19th century the school reopened and operated until 1821 while in 1842 it was reconstituted by the Holy Community in Karies and it operates until today.

At the monastery there are three unique wall mounted mosaics of Mount Athos from the Byzantine era (10th - 14th century) and the murals of the Macedonian School (1312) which are situated in the Katholikon of the monastery, the sacred sacristy, the museum of the Monastery and the oldest belfry in Mount Athos. At the temple there is a tower with a clock, where the hours are stated with a human like mechanism which keeps the hammer.

The current monastic strength of Vatopedi exceeds 100 monks and many of them come from Cyprus while the brotherhood includes monks who come from many different countries of the world.

Virgin Mary Paramythia is a mural of the 14th century, which subsequently was transferred to a chapel. In older times priests when exiting the Katholikon, after the end of mass, used to worship the picture of Virgin Mary which was in the exonarthex. There the abbot gave the keys of the closed for the evening hours gateway of the Monastery to the porter in order to open it. One tiem after the end of mass the priests were withdrawn to their cells to rest until they would start their daily tasks, and then the gate of the Monastery would open. However they didn't know that outside the gateway there were pirates ready to invade and destroy everything. At the temple there was only the abbot committed to his prayer. When suddenly he heard a voice which did not resemble any human voice. He looked around scared but he could not see anyone. Filled with fear he tried to concentrate to understand where this voice was coming from, and when he realized the voice was of the Virgin Mary he listened carefully. He then heard the voice of the Virgin Mary telling him to be careful and not to open the gate of the Monastery because outside there were pirates, instead she told him to climb the walls and send them away. Amazed the abbot gazed at the image of the Virgin Mary. He witnessed an amazing miracle, the living figure of the Virgin Mary. The Infant Jesus whom she kept in her hands came to life as well and moved His right arm and closed the mouth of the Virgin Mary turning toward her his bright face and saying "Don't, my Mother, don't tell them that, let them be punished because they neglect their monk tasks". Then the Virgin Mary with great maternal sincerity towards her only Son, lifted His hand, held it, turned her face to the right and repeated not to open the gate and to climb the walls to chase the pirates and after doing this to repent because her Son is angry with them. She repeated these words for the third time. After the dialog the Virgin Mary and the Holy Infant returned to the picture. The abbot called all the monks to inform them about the miracle and with surprise they looked toward the picture of the Virgin Mary which had changed. The Virgin Mary was holding the right hand of Christ below her mouth and tilting her head to the right to avoid it. The expression on her face is filled with endless indulgence, love and maternal affection. Jesus Christ although He is represented as an infant, has a strict expression like a Judge. She was named 'Virgin Mary Paramythia' which means Comforter and was transferred to the chapel of Paramythia.

It is a mural located in 'Midnight Office'. The picture was named like that when the daughter of the Emperor Theodosios, Plekida, leaving from Rome where she was married, wanted to visit her brother Arkadios in Constantinople. She requested permission to visit the Monastery of Vatopedi as she would be passing by Mount Athos. While she was walking in order to enter through a small side door, she heard a loud voice that came from the picture telling her that she is not allowed to enter since she violated the ban on women entering Mount Athos. Then, scared as she was, she asked for forgiveness from Virgin Mary and left immediately from Mount Athos. In commemoration of this miracle she built the chapel of Agios Dimitrios at her own expense, and she ordered a mural of the Virgin Mary to be made in the place where she heard the voice.

The miraculous picture is a mural of the 14th century and it is located in the narthex of the chapel of Agios Dimitrios. It got its name when a short tempered monk and cleric arrived late each day in the dining room and as a result one day he was not served food. The angry monk stabbed with a knife the picture of the Virgin Mary on the face, swearing at it. Suddenly the picture began to spout blood from the point where it was stabbed, while the monk got blind and fell down. He remained in this situation for three years tears and he begged the Virgin Mary to forgive him. After three years the Virgin Mary appeared to the abbot of the Monastery saying that she grants the health to the bold deacon but the hand that committed the sacrilege will be punished. Indeed when he died during the collection of his remains, while the whole body had melted his right hand remained unchanged and is kept so until today. 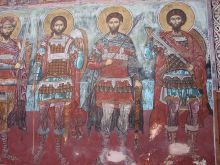 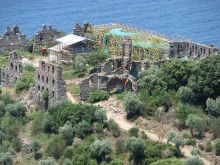 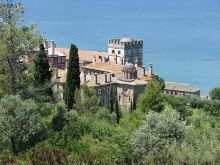 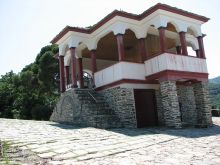 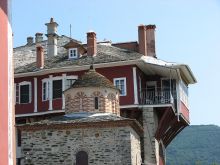 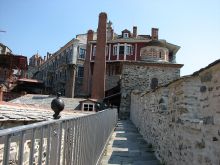 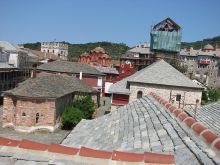 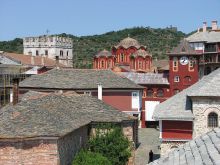 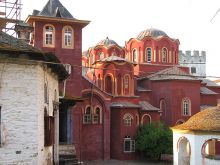 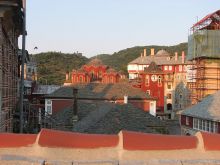