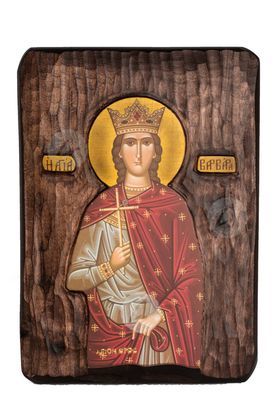 Saint Barbara lived in the 3rd century AD. in Heliopolis of Egypt, during the time when Maximian was the emperor of Rome. Her father was a wealthy pagan named Dioscorus who wanted to marry her to a man of the same religion. The Saint, being a Christian, refused and as a result Dioscorus denounced her to the local authorities. Barbara was horribly tortured and eventually beheaded by her own father who was punished for his act, falling dead from lightning.

Saint Barbara is the patron saint of Drama, Argyroupoli and Rethymno and the patron saint of the Greek Artillery. Fragments of her Holy Relic are found in the Monasteries of Chilandari, Karakalou and Koutloumousiou on Mount Athos. The Orthodox Christian Church celebrates her memory on December 4 of each year.

Let us honor the holy Barbara for, with the aid of the Cross as her weapon, she crushed the snares of the enemy, and was rescued from them like a bird.