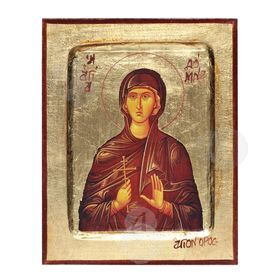 Lithography (icon) of Saint Domna of Nicomedia with real gold leaf in MDF.

Saint Domna lived at the end of the 3rd and the beginning of the 4th century AD. She was a priestess of a pagan temple in Nicomedia of Asia Minor. The reading of the epistles of the Apostle Paul was the reason to renounce idols and to embrace the Christian faith. From that moment on she lived a prudent life, distributing her fortune for charity. She was baptized a Christian by Cyril, Bishop of Nicomedia.

When Emperor Maximian began the persecution against Christians, she was arrested and martyred by beheading. Saint Domna protects pregnant women and midwives. The Orthodox Christian Church celebrates her memory on December 28 of each year.

Apolytikion of Saint Domna the Martyr of Nicomedia

Blessed is the earth that drank your blood, O prizewinners of the Lord, and holy are the tabernacles that received your spirit; for in the stadium ye triumphed over the enemy, and ye proclaimed Christ with boldness. Beseech Him, we pray, since He is good, to save our souls.