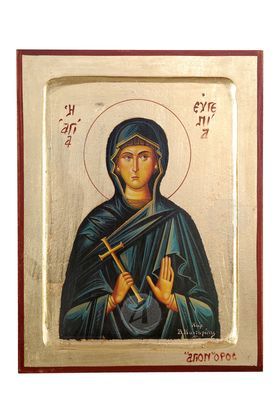 Saint Eugenia lived in the second half of the 3rd century AD. She came from Rome and her parents were Claudia and Philip. Due to her father's job, the family moved to Alexandria, where she studied and was educated. After her studies, reading the letters of the Apostle Paul, she was very impressed and decided to become a Christian. Refusing to marry, she dressed as a man and took refuge in a monastery. There she was named Eugenia, was catechized and baptized a Christian.

After many years, she returned to her home and her parents welcomed her with tears of joy. Her family embraced the faith of Jesus Christ, resulting in her father being killed by the pagans. The Saint, persecuted for her faith, was beheaded by pagans in Rome. In this martyrdom, she surrendered her soul to God. Her memory is honored by the Church on December 24 of each year.

Apolytikion of Saint Eugenia the Nun-martyr

Being mystically moved by the Spirit, thou didst sing God's praise, thereby receiving the clear light of divine knowledge in thy heart; and shining bright as the sun with a righteous life, thou overcamest the devil in martyrdom. O Eugenia, thou most glorious Martyr of the Lord, entreat Christ God to grant great mercy unto us.