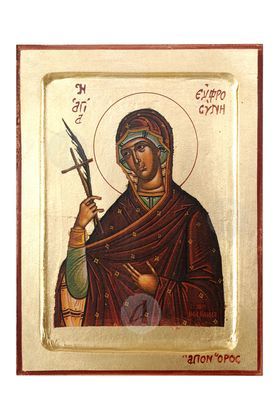 Saint Euphrosyne lived in the years of Theodosius the Younger (around 410 AD) and she was an only daughter and very rich. Her father Paphnutius was the richest man in Alexandria. He and his wife were known for their warm faith in God. When she became an adult, her father wanted to marry her to a young man of high social class. But Euphrosyne wanted to become a nun, so she disguised herself as a man and went to a male monastery, where she took the name Smaragdos. She lived there for 38 whole years until the end of her life.

Parts of the Holy Relic of the Saint are located in the Kykkos Monastery of Cyprus and in the Chapel of Osias Xenis of Russia in Mandra, Attica. Her memory is commemorated on September 25 of each year.

Apolytikion of Saint Euphrosyne of Alexandria

The image of God, was faithfully preserved in you, O Mother. For you took up the Cross and followed Christ. By Your actions you taught us to look beyond the flesh for it passes, rather to be concerned about the soul which is immortal. Wherefore, O Holy Euphrosyne, your soul rejoices with the angels.