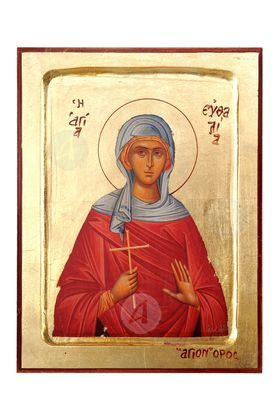 Saint Euthalia and her mother of the same name lived in Sicily. Mother Euthalia once saw in her dream the Holy Martyrs Alpheus, Philadelpho and Kyprino. After this incident, she and her daughter embraced the faith of Christ and were baptized. Her son Sermilianos, as soon as he was informed of the incident, tried to kill mother Euthalia, who eventually escaped. Saint Euthalia criticized her brother for his attitude. Sermilianos became angry and beheaded his sister, as another Cain.

The Orthodox Church celebrates her memory on March 2 of each year.