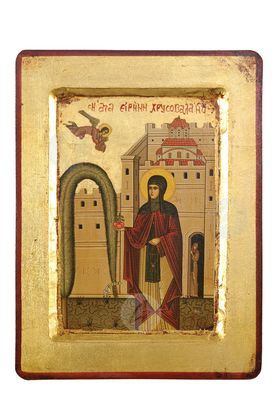 Saint Irene Chrysovalantou was born in 825 AD. in Cappadocia of Asia Minor during the period of the great iconoclasm. Her father was Filaretos, the military commander of the area. When in 843 AD. Empress Theodora put an end to the iconoclasm and she asked Filaretos to bring Irene to Constantinople in order to marry her son Michael. But Irene wanted to follow the ascetic life and went to the famous Monastery of Chrysovalantou where she became a nun at the age of only 15.

When the Abbess of the Monastery passed away, Irene succeeded her and performed a great spiritual work. She was given the foresighted gift and as a result a large number of Christians flocked to the monastery to hear her speech. He slept peacefully at the age of 104. The Saint was distinguished for her ascetic life and for the miracles she performed. The Orthodox Christian Church commemorates her on July 28 of each year.

Not a temporal kingdom on earth didst thou obtain, but Christ, thy most comely Bridegroom, vouchsafed thee heavenly crowns, and thou reignest as a queen with Him eternally; for thou didst dedicate thyself unto Him with all thy soul, O Irene, our righteous Mother, thou boast of Chrysovalantou, and mighty help of all the Orthodox.