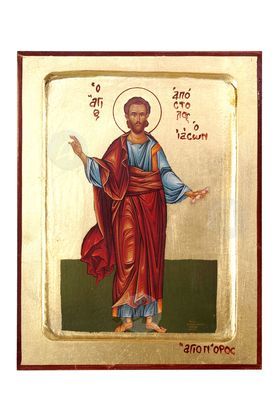 Jason and Sosipater were disciples of the Apostle Paul and devoted themselves with particular zeal to the missionary work of the Church and to the spreading of the message of the Gospel. Jason was bishop of Karsos and Sosipatros of Iconium.

Their missionary activity led them to Corfu to preach and spread the Divine Word. There, the pagan ruler Kerkyllinos arrested and imprisoned them. Inside the prison they managed to make Christians seven notorious robbers of the island (Jacques, January, Euphrasius, Mammino, Marsalio, Satornino, Faustian), the jailer Antonios and the daughter of the ruler Kerkyllinos, Corfu, the conversion of which became an occasion for many on the island to believe.

When Kerkylinos drowned in a shipwreck, he was succeeded by Datianos, whose first action was to lead Sosipatros and Jason to the fire. Sosipatros died. Jason, however, finally managed to save himself and Christianize Datian and his entire family. The shrines of the Holy Apostles Jason and Sosipater are reverently kept in the holy monastery of Saint Luke of Boeotia. Their memory is celebrated on April 29 of each year.

Apolytikion of Jason and Sosipater of the 70

O Holy Apostles, intercede to our merciful God, that He may grant our souls forgiveness of sins.