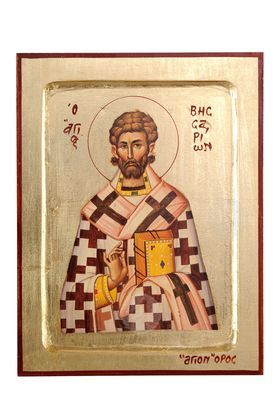 Lithography (icon) of Saint Bessarion of Larissa with real gold leaf in MDF.

Saint Bessarion was born in Porta Panagia of Trikala in 1490 AD. by pious parents. From a very young age he embraced monasticism and he was student of the metropolitan of Larissa, Mark. At the age of twenty he was ordained bishop of Domenikos and Elassona. However, the inhabitants of the area refused to recognize him as their pastor, a fact that led Patriarch Theoliptos to remove him from the position of bishop. He was elected metropolitan of Larissa in 1520 AD, after the death of his spiritual father.

Saint Bessarion performed a great spiritual and charitable work. He contributed a lot to the reorganization of the solitary life and he founded the famous monastery of Bessarion. The Saint died in peace in 1540 AD. at the age of fifty years. He is the patron saint of Kalampaka and Trikala. The Skull of the Saint is located in the Monastery of Dousiko in Trikala. The Orthodox Christian Church commemorates him on September 15 of each year.