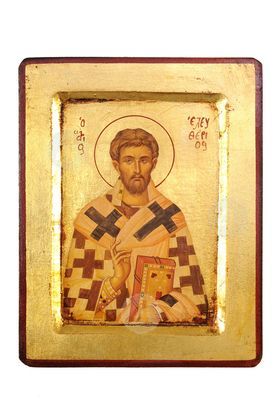 Saint Eleutherios was born in Rome in the 2nd century AD. by wealthy parents. At a very young age he was orphaned by his father and his Christian mother, named Anthia, gave him a Christian upbringing and sent him to the bishop of Rome Anicetus, to educate him. Anicetus, seeing the virtuous life of Eleutherios, ordained him a deacon and then bishop of Illyricum at the age of just 20 years.

The Saint's action in Illyria angered the emperor Septimius Severus who ordered his arrest. Eleutherios suffered horrible tortures but remained steadfast in the Christian faith. During his martyrdom many people believed in the true God. Eventually, he was beheaded along with his mother Anthia. He is considered the protector of pregnant women. His memory is commemorated on December 15 of each year.

Apolytikion of Saint Eleutherios the Hieromartyr and Anthia

Adorned with flowing priestly vesture and with dripping streams of blood you at once went to your Lord Christ, O blessed wise Eleftherios, annihilator of Satan. Wherefore, do not cease to intercede for those who honor your blessed struggles in faith.