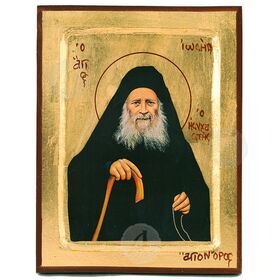 Lithography (icon) of Saint Joseph the Hesychast with real gold leaf in MDF.

Saint Joseph the Hesychast, known as Fragkiskos Kottis was born on February 12, 1897 AD. in Lefkes of Paros. Fragkiskos was not particularly educated but showed great zeal in the study of the lives of saints and ascetics. His thirst for ascetic life led him to Katounakia of Mount Athos in the year 1921 AD. In 1924 AD went with father Arsenios to the Holy Cell of the Annunciation of the Virgin in Katounakia and a year later became a monk named Joseph. In the Skete of Saint Basil where he lived for about ten years, he had Elder Ephraim Katounakiotis as his subordinate. In the New Skete of Athos, where he settled in 1953 AD, he died after many struggles and hard ascetic life on the 15th of August 1959 AD.

The spiritual rebirth that took place in the Orchard of the Virgin Mary with the manning of six monasteries is due to Elder Joseph the Hesychast. The Holy Synod of the Ecumenical Patriarchate of Constantinople classified him ammong the Saints on March 9, 2020 AD. The relics of the Saint are found in the Holy Great Monastery of Vatopedi. The Orthodox Christian Church commemorates him on August 16 of each year.

Apolytikion of Saint Joseph the Hesychast

The offspring of Athos and the great adornment of Monks, * defender of ascesis, haven of silence and prayer, * our Father you were revealed to be, * through your life you showed us, Grace's ways of salvation, * saving through your entreaties those who faithfully pray to you. * And therefore intercede with the Lord, * O Righteous Father Joseph.