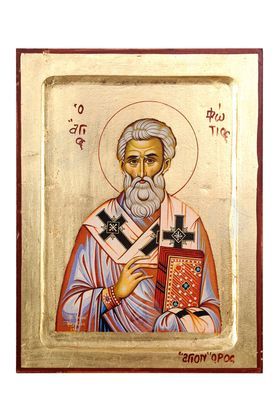 Saint Photios was born in 820 AD. from a wealthy family and was one of the most brilliant figures in ecclesiastical history. Photios was distinguished for his character, his intelligence and his brilliant studies, as a result of which he rose to high positions. When Patriarch Ignatius was dethroned, Photius was ordained Patriarch and laid down his life in the service of the Church.

Later, however, he left the patriarchal throne and died in exile in the Armenian monastery. Saint Photius was one of the greatest ecclesiastical writers and fought valiantly against the enemies of the Church. For all his offer, he was named Great. Fragments of the Holy Relic of the Saint are found in the Monasteries of Dionysiou, Xenophon on Mount Athos and Kykkos in Cyprus. His memory is commemorated on February 6 of each year.