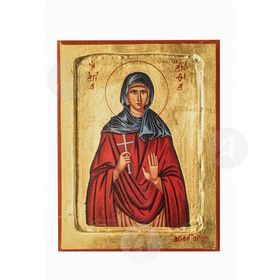 Saint Anthia was the mother of Saint Eleutherios. Anthia embraced the Christian faith when she heard sermons by the disciples of the Apostle Paul. Eleftherios was orphaned by his father at a young age and his mother Anthia took care of him. She raised him according to the requirements of Christianity and took him with her to Rome to study with Bishop Anicetus. In 182 AD Saint Eleftherios became Bishop of Rome and was distinguished for his philanthropic work.

Eleutherios, during the period of persecution of Christians by Septimius Severus, harshly criticized the emperor. As a result, he was arrested and martyred by beheading. When Anthia ran and hugged her son's lifeless body, she also martyred by beheading. The Orthodox Christian Church celebrates the memory of Saint Anthia on December 15 of each year.

Apolytikion of Saint Anthia and Saint Eleutherios the Hieromartyr

Adorned with flowing priestly vesture and with dripping streams of blood you at once went to your Lord Christ, O blessed wise Eleftherios, annihilator of Satan. Wherefore, do not cease to intercede for those who honor your blessed struggles in faith.