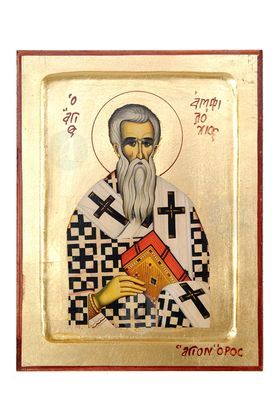 Saint Amfilochios was a Cappadocian in origin and a friend of Basil the Great. Amfilochios was distinguished for his great education and piety, a fact that made him bishop of Konya in 344 AD. Participating in the Second Ecumenical Council in Constantinople, he was distinguished for his actions, as a result of which he increased his prestige and influence in other areas as well. Guided by the inspired words of the Saint Apostle Paul, he wrote important speeches on the Orthodox Christian faith and became a brilliant figure.

He died in peace in 394 AD. and the Church commemorates him on November 23 of each year.